. . . when they say working with silk charmeuse can be a challenge. It was tricky to cut out, and sewing a decent seam took total concentration. Most of all, though, as the judges love to point out on Project Runway, charmeuse highlights every imperfection in the final garment. 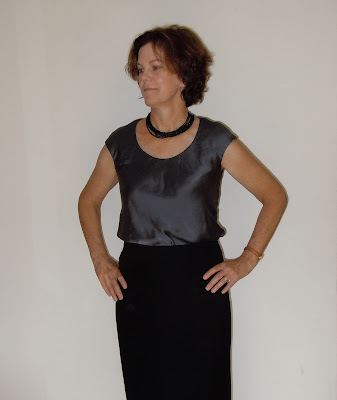 This is the top from Vogue 1310, a Chado Ralph Rucci design. The minimalist simplicity (or apparent simplicity anyway!) of this top pushed all my buttons.

A note on the fabric requirement: When I went fabric shopping in NYC a couple of weeks ago, my list said that this top needed 2 1/4 yards of 60" fabric, and I felt certain I had noted it down wrong. For a simple sleeveless top? I bought 2 yards of 45" fabric. Of course, it turns out that the top is cut on the bias and self-lined, and it does take that much fabric. I wanted to keep the self-lining, so I experimented and found that shortening the top by 2 inches made it so I could fit everything on the fabric I had. The shorter length seems fine in the finished top. The hem does flare out a little more than I would like, but I suspect this is from my inexperience with charmeuse and with fabric cut on the bias, so that I unintentionally stretched the fabric while hemming it. Here it is untucked: 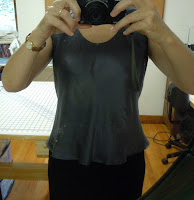 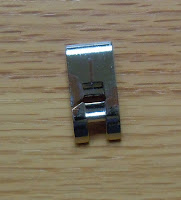 Sewing on this fabric was especially difficult because the bottom of my presser foot looks like this:
Can you see that pieces of the finish have peeled off? No, no, no. Not the way to sew with charmeuse. I pushed on through, so to speak, but I also finally ordered a new #1 foot, along with an invisible zipper foot, which was not easy to find for my old-style mechanical Bernina.

Considering that the pattern has only two main pieces (plus two for interfacing), this top was surprisingly labor intensive. Basting sew-in interfacing (silk organza) in place, basting twill tape to the neckline and armhole edges to stabilize them, understitching the lining by hand, and basting the hems of the shell and lining, all on this very slippery fabric, meant that I spent more time than expected with needle and thread in hand. I actually like hand sewing -- just didn't realize there would be so much of it. 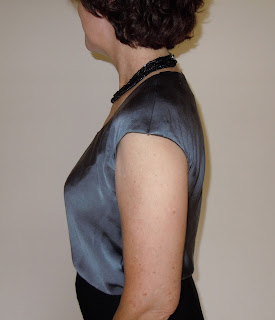 I'm not thrilled with the results I got with the stabilizing twill tape. I stitched the 1/4" tape right down its center over the seamline when stitching the shell and lining together at the neckline and armholes, as the instructions say to do. As I feared, though, this meant that when I turned the lining to the inside and pressed it, I had to either press the twill tape in half lengthwise (hard to do and looks bulky), or let the shell project 1/8" past the lining, which means there is an excess of lining fabric in the shoulders. Maybe it would work better to stitch along one edge of the tape rather than down its center? Also, curving the twill tape to fit the curve of the seam made the tape try to stand up on its edge, for lack of a better description. Just not at all convinced I did this part right. The armholes in particular came out a bit wonky. If I make this up again, I'll make the armholes bigger, too, since I don't have twig arms like the model on the pattern envelope. 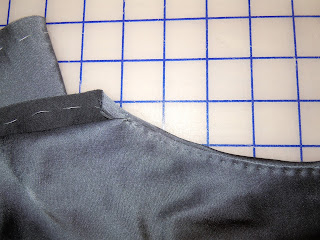 And there we are: another piece of clothing for my life in rural New Hampshire ;-) 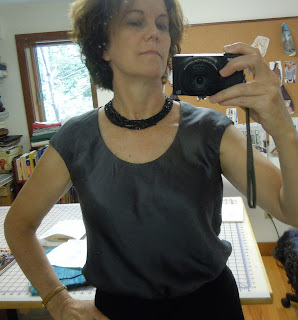 
Book notes: Trying to read more novels that have come out recently, instead of lagging behind by at least 10 years as often happens. I'm well into A Visit from the Goon Squad by Jennifer Egan just now, and I'm finding it moving, surprising, and delightful.
Posted by Patricia at 2:46 PM 11 comments:

Under the wire: The Victoria blazer

My Victoria blazer is done, and just in time for the end of the sew-along! 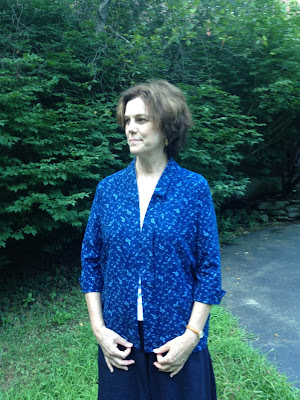 This jacket was a delight to make. Many of the details were new to me, including the French-seamed cuff with a slit, the way the lining is put in, and the dart that continues right into the neckline seam. Nothing was difficult to do, but it had plenty going on to keep it fun and interesting.


(I am slightly disturbed to see that in some of my photos, it looks as if I have nothing on underneath the jacket. But these are the photos we got, and now the light is gone, so you will just have to believe that I'm wearing a white tee shirt that pretty much matches my pale white skin. Have I not been outside at all this summer?)

I used a linen/rayon print for the shell and a light blue cotton lawn for the lining, both from Mood. The lawn was described online as sky blue, but I would call it something more like a grayed-down robin's egg blue. It was in fact exactly what I was hoping for. You can see some of it in this photo, but it looks much paler here than it really is; it too appears to match the white tee shirt! 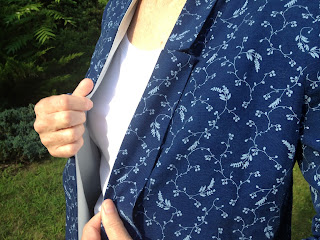 This might be a good place to mention that my sweet husband took these photos on his iPhone, insisting that it takes better photos than my camera. The jury is out. 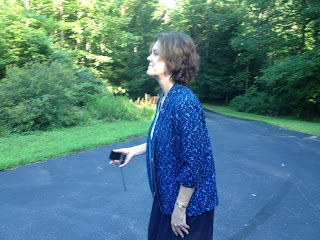 See, camera that was intended for picture taking is in my hand. 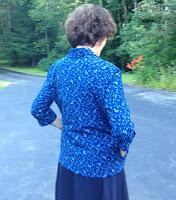 I first used my lining fabric for the pockets, but I wasn't happy with how it looked. Even though the pockets are inset a quarter inch past the seam, the contrast between the two fabrics was too much. So I took those pockets out and redid them with the outer fabric. A before photo:

And an after photo, where I can put my hand in my pocket without exposing a startling flash of pale: 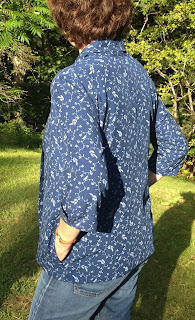 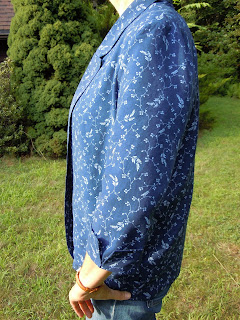 This blazer does have a bit of a bubble or "O" shape, which you can see in the photo to the left. I think of this shape as a 1980s thing, and I wondered whether it's really right for my body type/age (you know, people who wore them the first time around . . . ) but I've decided I'm good with it as a casual cover-up. 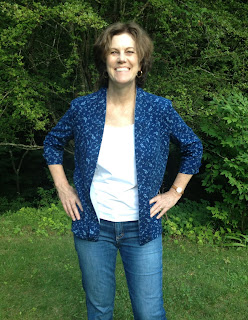 Thank you, talented people at By Hand London!

Patricia
I live in New Hampshire, USA, with my husband and our teenage son. I'm lucky enough to have the time and space to step up my sewing skills, so the only question is . . . what am I waiting for? This is where I'll keep track of my experiments and progress, along with bits of other things that interest me. Comments and questions are welcome!