Oops, the camera caught me cheating . . . 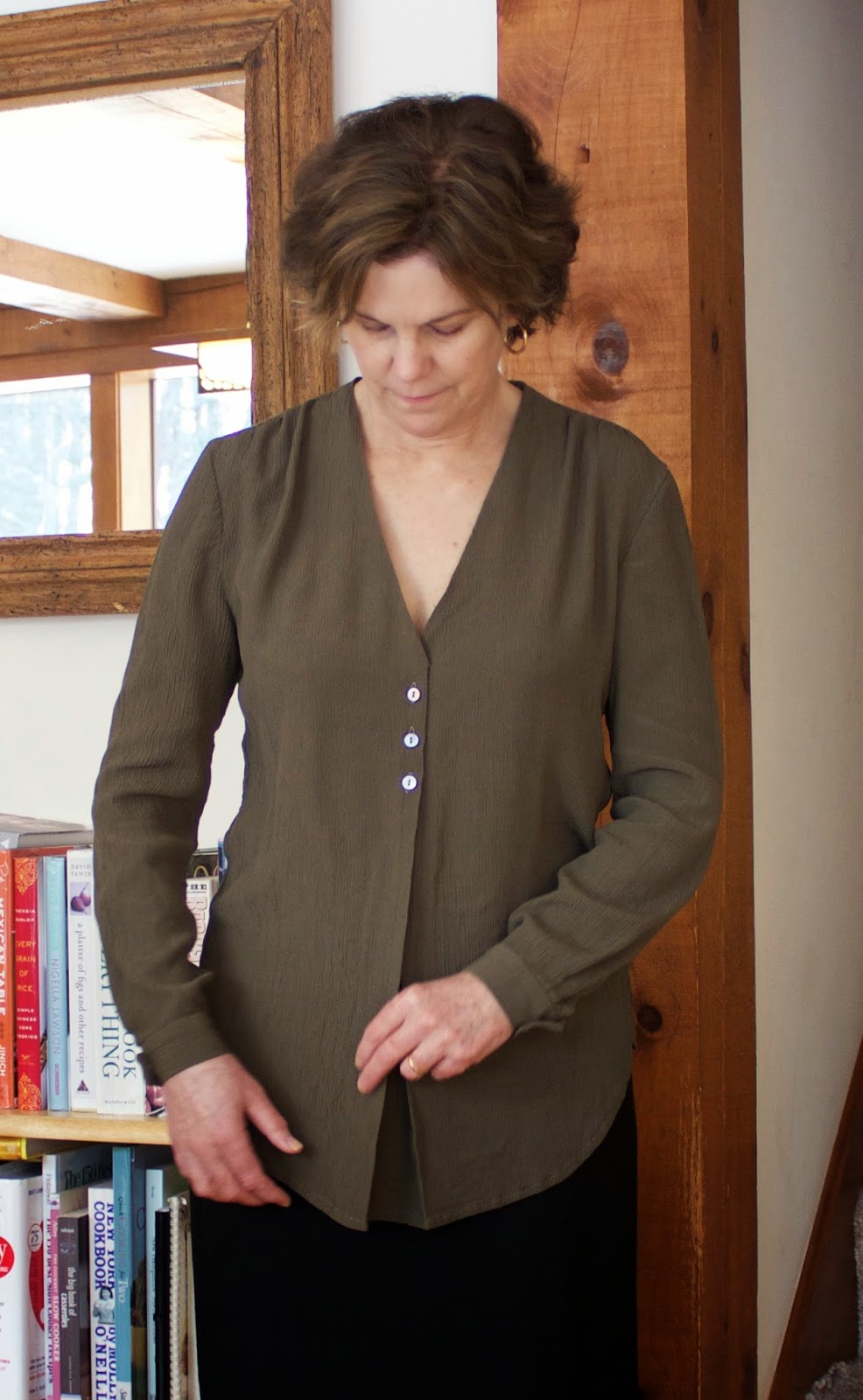 . . . trying to arrange the folds of the front pleat to hang just so, and maybe if I hold very, very still, I'll be able to get at least one photo in which this doesn't look like a maternity top. 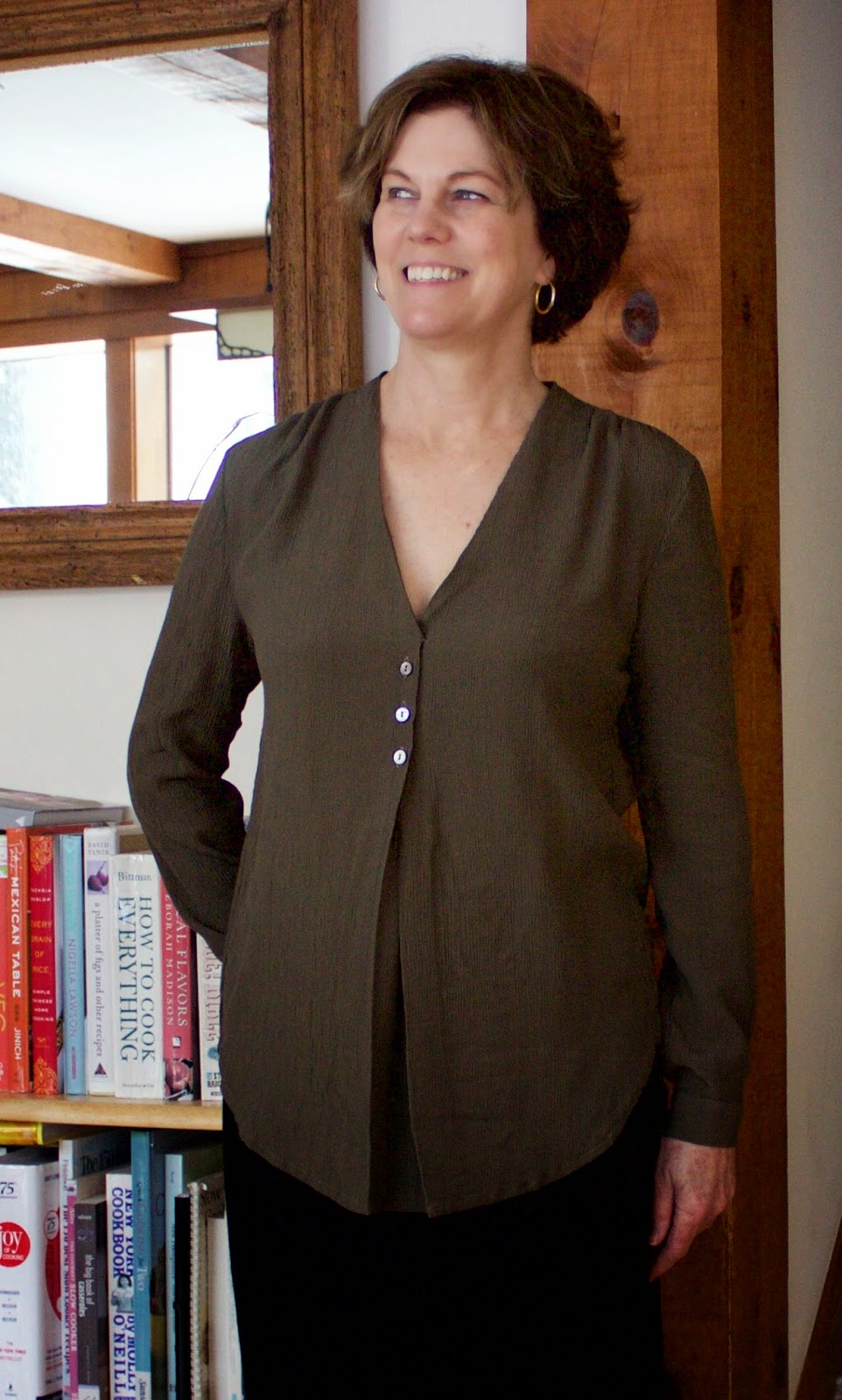 This is view B of Vogue 1412, a loose-fitting pullover top with some nice details. 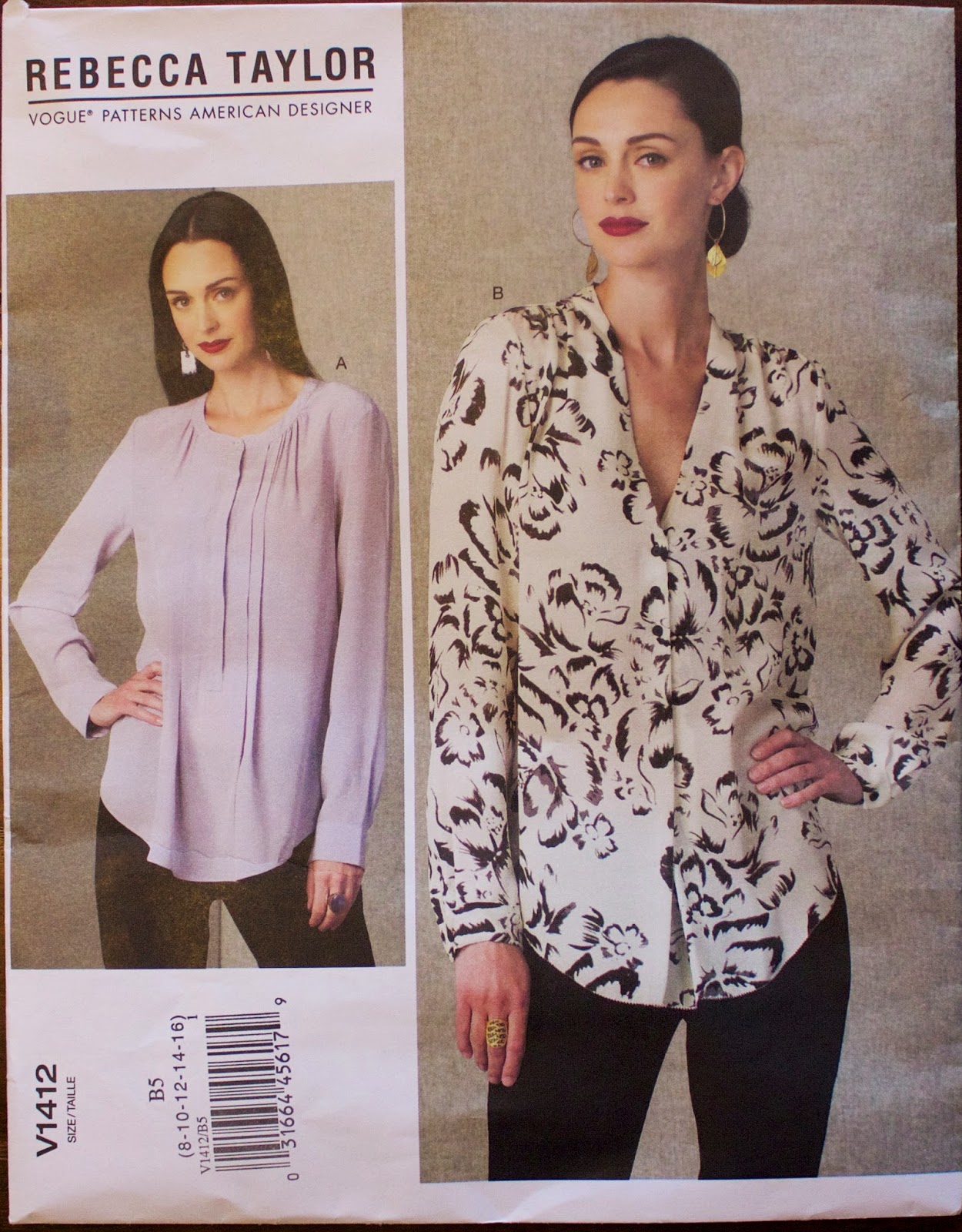 It's all right, really, as this was one of my stashbusting exercises. I take a pattern that I think is unlikely to work well for me (no fault with the pattern usually, just not a good match for my body), and I use a fabric that I would like to see disappear from my stash. The pressure is off, and I most often learn something.

What I see here is that I could use a different fabric (I've been disenchanted with crinkle rayon since the first time I used it but already had this in my stash)—something more drapey, with some slip, that won't get hung up on whatever I'm wearing on the bottom. And, crucially, I could remove all that pleat business in the front and just make a center front seam below the buttoned section. 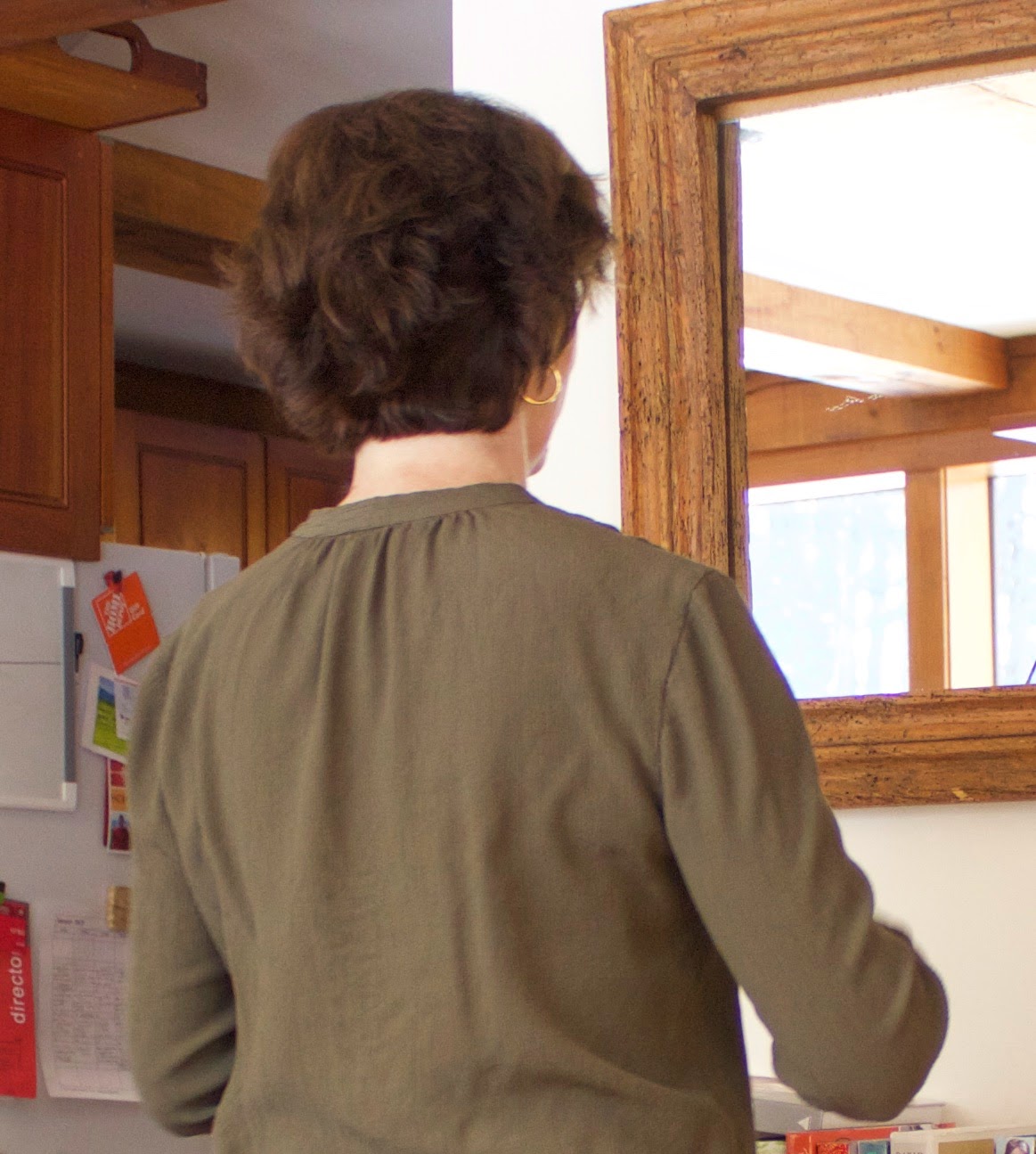 The back has some nice gathers where it meets the collar band.


Another thing I learned was how to insert a little placket in the sleeve opening. But if you look closely at the first photo of this post you will see that I somehow got it backwards; the cuff should wrap the other way, but I couldn't make it happen because of how I put the placket in. That's okay: I get the idea and will get it right next time. 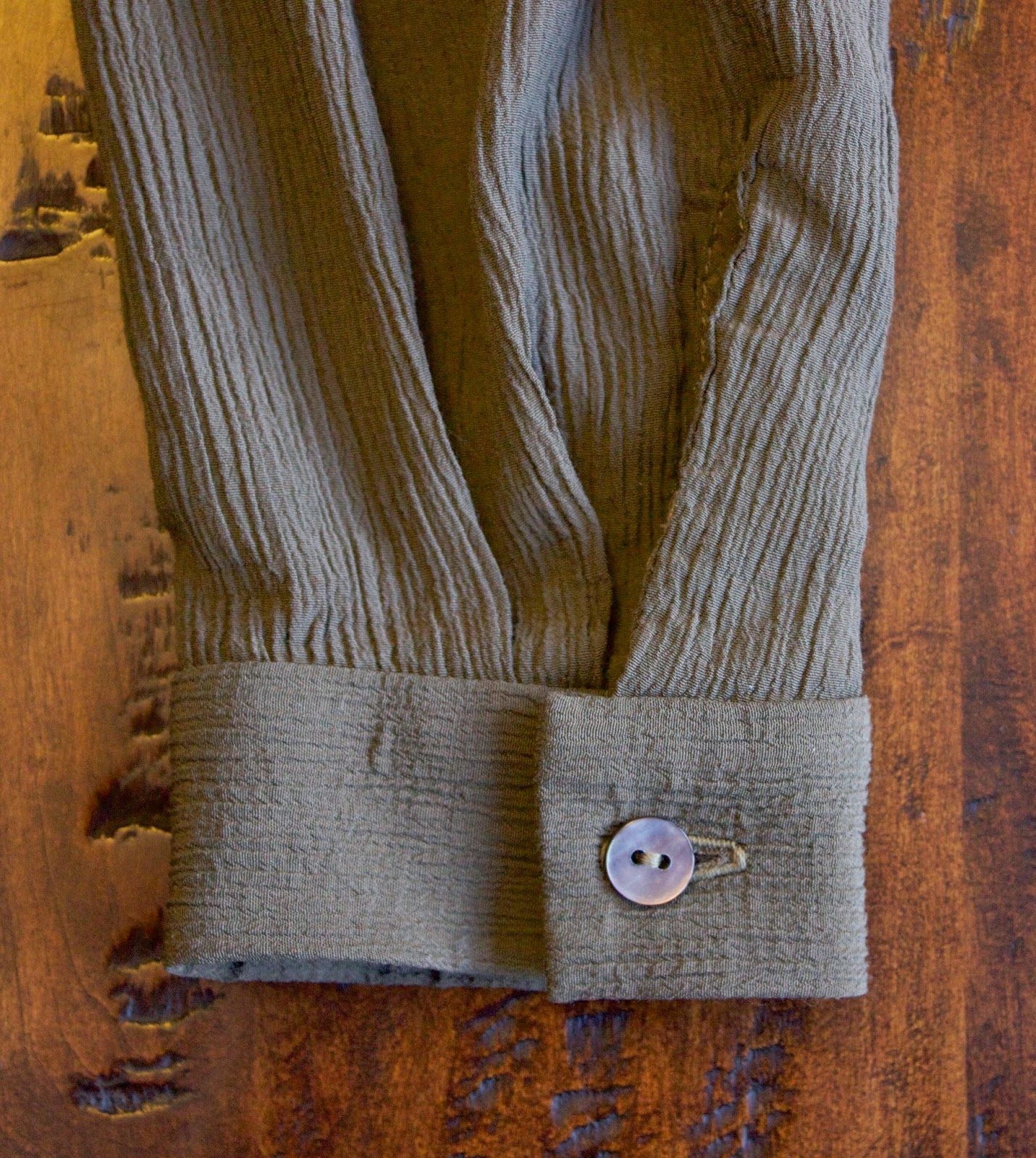 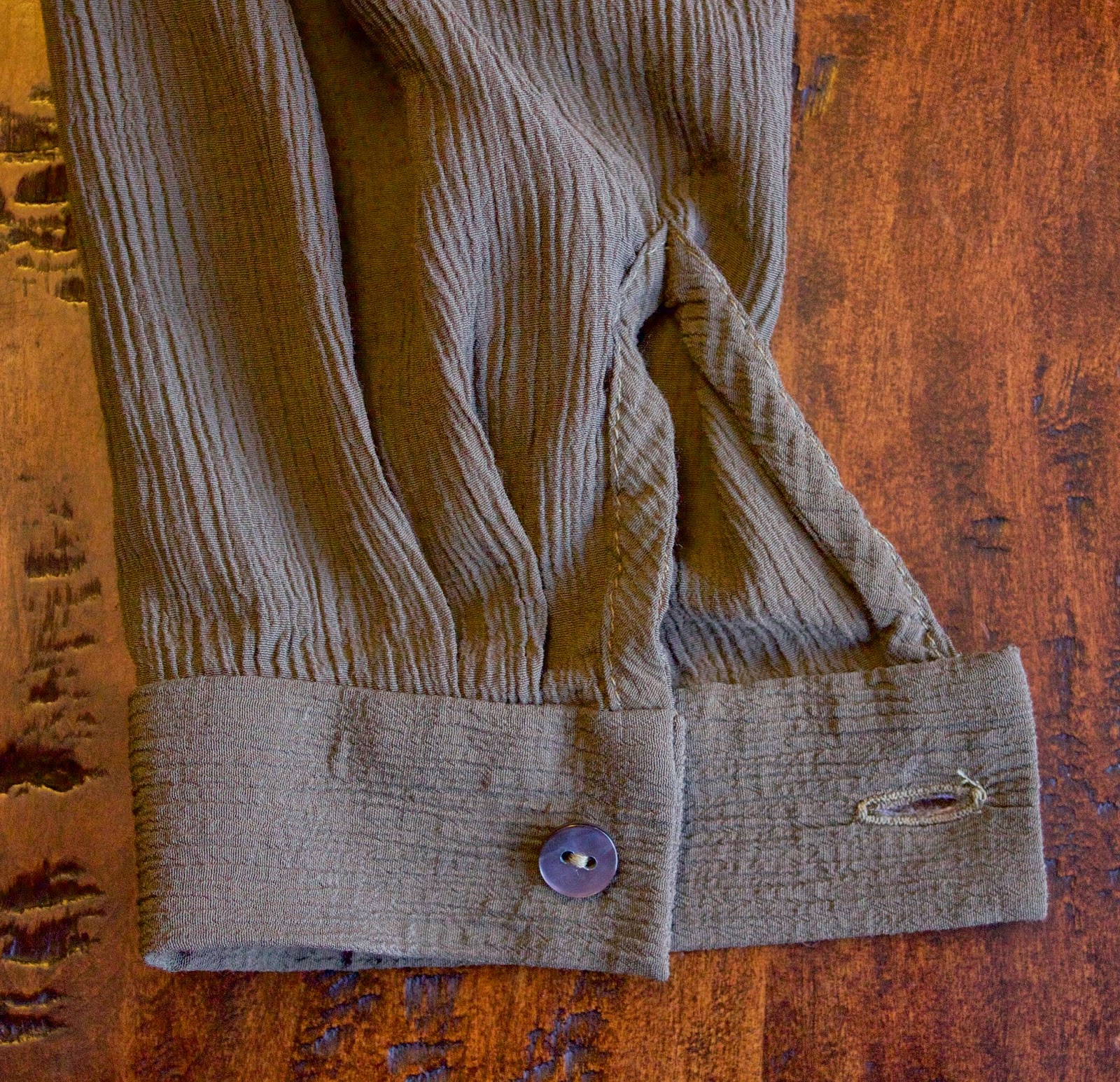 A couple of ideas on things to watch:


Seeing the movie Boyhood recently (which I liked a lot, by the way) reminded me of a very different but also longitudinally filmed series of documentary pieces that my husband and I watched obsessively some years ago. It made us laugh, it made us tear up, it made us squirm, and I still think about it surprisingly often. If you have not seen the Seven Up series, which follows the lives of a set of British children of various backgrounds over the years, do yourself a favor and take a look.

Also British and also really interesting: Whoa, have you seen Black Mirror? It’s like a Twilight Zone about where technology might take us, with a new story and different characters every episode. We’re watching it on Netflix. It is superbly done and absolutely addictive. But it’s dark, and when I say dark, I mean it. The first episode in particular could be difficult to stomach: I will just say that it goes where TV in the U.S. would never dare to go.

And an update on my mother-in-law’s cave house, for anyone who saw that note in my last post:

Danielle has had exactly one potential buyer show up to take a look at her home. And that was . . . Kat Von D. Not to namedrop, but I couldn’t resist telling about it. Apparently the tattooist liked it a lot, but she is looking at a number of properties in southern Spain, so we’ll see. We think it would be kind of hilarious if she buys it.

Patricia
I live in New Hampshire, USA, with my husband and our teenage son. I'm lucky enough to have the time and space to step up my sewing skills, so the only question is . . . what am I waiting for? This is where I'll keep track of my experiments and progress, along with bits of other things that interest me. Comments and questions are welcome!